I was interviewed for the Suburban today (At the library). It was concerning the art stuff of course. There were two other kids she interviewed. Mom said that Joanne picked us three kids to be interviewed. Does that mean she thinks I have promise or something? I finished the portrait of Crystal I was doing. I think it turned out pretty well.

Interesting that I don’t dwell on the subject of my art. Joanne was my oil painting teacher. I didn’t want to take that extracurricular activity because of my social anxiety but my mother forced me to and I ended up rather enjoying it. I thought at the time that I was one of the stronger painters in the class. I guess like a lot of artists I’ve always oscillated between thinking I’m the best ever, and the worst ever. We need that blind, and perhaps delusional, confidence and courage to create, but then of course we take a second look at our work and want to kill ourselves because it’s so horrifyingly bad.

I have to baby sit at 12:30 tomorrow (for neighbours). Sigh. I’m feeling a bit down with myself. I hope I meet a guy in PEI. We will probably be leaving on the 18th. I really hope I meet my dream guy there. Want a description of my dream guy?

His name would be Taylor Full.

Omg. You know why I wanted his last name to be Full? Because I wanted to have a daughter and name her Bliss. So her name would be Bliss Full. Yeah. I mean… but come on, cut me some slack, I was fifteen!

He would have shining green eyes, with just long enough and dark enough lashes. He would have dirty blond, wavy hair. It would be in a haircut that’s kinda messy, kind of ‘I don’t care’ style. He would have a nice, straight nose, just the right size. His eyebrows would be straight, not too bushy, you know? Just right. His lips would be like this: (I drew them). When he would smile he would have dimples. He would be just muscular enough, and about a head taller than me. He would not have a dark tan, but he would certainly be a lot darker than me! He would look a bit like this only cuter! (He would have a square face.) (His ears would be not too big, not too small, not stick out). I will write the personality and stuff tomorrow. Now I want to sleep and dream of him! 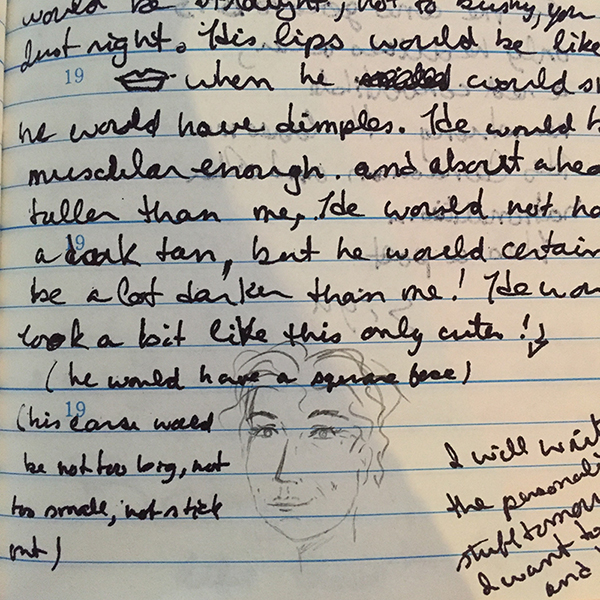 I won’t keep you in suspense.

He would be sixteen and born in October, so he’s in the same grade as me and goes to BHS only he drives a car, a red convertible. He’s strong. He loves me. He’s Canadian and other nationalities. He’s a poet. Sigh.

Wow. How very specific. But it doesn’t stop there.

He would be sensitive and generous and nice and he would worship the ground I walk on. He would think I’m the most beautiful person in the world. His parents would be rich, but he would want to become a famous movie director/writer and make his own money. He would be independent, and fun and totally unprejudiced in every way. SIGH I wish.

Too funny. I love that I added the detail of the rich parents. And the red convertible. ?!?!? I was never, ever a car person, so that part’s weird. What’s sort of fun though is that the man I ended up with actually matches a fair bit of these criteria. He has green eyes, and his hair is definitely in an ‘I don’t care’ style, even though he cares deeply. He’s got good eyebrows and great lips. He’s strong and muscular, he’s not tanned but certainly darker than me. He’s Canadian, he’s sensitive, and generous, and loves me, and thinks I’m the most beautiful person in the world. He is definitely not a poet, but he fancies himself quite the rapper. He doesn’t come from money but  he does drive a car, and while he’s fun and independent, he does have a few prejudices, but they mostly match up with mine so it’s all good. 😉

It’s nice that I can look back on this now and laugh, rather than sink into a depression born of lonely desperation. Progress!

Babysitting today was a drag. I babysit again tomorrow night for a new customer, someone on Viney. Boring. Life sucks.