I am a broken shell of a human. Bitter and sickly, and an utter Scrooge when it comes to stepping outside of my house for more than an hour, or further than a block away. But I wish it wasn’t so. Like most, I like to travel, in the sense that visiting new and different places is interesting and stimulating. Unfortunately, I’m not good at travelling. I don’t mean that I’m bad at organizing trips, I mean that I’m too physically fragile to ever really be able to fully enjoy vacationing. I’m not as frail as I was as a child, but I’m still, it seems, more prone to illness than the average Joe anytime I’m confronted with climate change. My body seems to be wholly incapable of adapting to differing environments.

I live in Montreal, Canada, and according to official officialness we have a humid continental climate with severe winters, no dry season, warm summers and strong seasonality. This is all true except I would change the word “warm” to “hot as hell” to classify our summers, and I call bullshit on this “no dry season” nonsense. Ok, technically, we never experience a season without precipitation but our winters feel very arid for someone with extremely dry skin.

My body has ostensibly adapted to this climate, but I still struggle with nature’s animosity, as my body is extremely sensitive. My eyes are prone to infection, my skin will break out in eczema from the slightest provocation, and will burn after literally five minutes in the sun. I’ve got every seasonal allergy imaginable as well as allergies to all mammals with fur, and even with no allergens in sight I’ve got sinus issues. Anytime I move from indoors to outdoors and vice-versa my sinuses are triggered. In fact EVERYTHING triggers my sinuses. Eating triggers nasal drip. Working out triggers it. Standing up triggers it. Leaning over triggers it. Reciting poetry triggers it. But I’m used to living this way and have more or less adapted (though my S.O. will tell you I haven’t learned not to complain about it!) But when I travel all of these problems are exacerbated. When my body is confronted with a different climate than I’m used to, it rebels, with snot. And thanks to my super fun anemia, I also have a weak immune system so I’m pretty much guaranteed to catch a cold no matter where I go.

When I was kid I really enjoyed airplane rides, I suppose because of the novelty. But now airplanes fill me with dread, because they are literally just viral incubators in the sky. I don’t think I’ve ever been on a trip and not gotten sick. I can’t blame the planes though, I get sick on road trips too. I get sick no matter where I go. I get sick in Europe, I get sick in the States, I even get sick just going to friends’ houses.

When I was younger, I think I felt like there was nobility in this suffering. Or perhaps I was simply ashamed of my own fragility and felt like it was my duty to suffer in silence so as to accommodate others. But as I get older, I grow less tolerant of this suffering. I’ve mostly reached a point where I’m unwilling to go to certain places because I know they will be lessons in enduring hardship. I still go to my mother’s and my sister-in-laws’ for holidays but I won’t go just to hang out because they have cats and dogs. I refuse to feel bad for not staying at the houses of friends with pets. Stop trying to guilt me into spending the night. When I was young I would put up with other people’s allgergen-rich homes because I was poor and polite. Now I don’t give a shit. If you’re insulted by me staying in a hotel, so be it. I will not hang out in your cat-infested house of horrors! 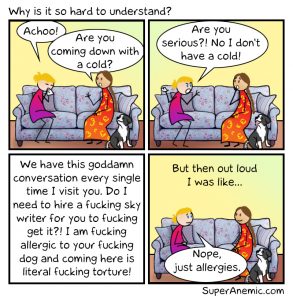 And I’m fucking done with Airbnb! And regular B&Bs for that matter. Regardless of how nice these places appear to be they are inevitably crawling with something that triggers all manner of runny noses and itchy eyes. And I will no longer tolerate that “Oh, it’s just allergies” attitude from myself or others. These supposedly innocuous allergies have gotten so bad that they are indistinguishable from a cold. It’s now happened to me more than once that I became so headachy, so runny-nosed, so lethargic and fatigued that I was convinced I had fallen ill, only to have this illness miraculously cured the moment I got home and took a shower.

So even though I’d like to travel, because there are a lot of places in the world I’d really like to see, I don’t always have the energy to face the inevitable onslaught of pain and discomfort that will follow. Which is why I’m done with all those listicles and pins advocating the ten places you simply must travel to before you turn 30! (Meanwhile, I’m 40 so according to society I’ve already missed the boat). Apparently you just haven’t lived until you’ve backpacked across Europe and stayed in these amazing hostels. But I can’t stay in hostels! I can’t even stay in chic hotels! I can only stay in 5-star chain hotels that bleach the fuck out of their sheets and have climate control in their rooms. Stop making me feel bad for not going to the back streets of such and such city. I can’t even go to the front streets of such and such city. I can barely handle the front streets of my city! (Thanks, smokers). And stop asking me where I’m going when I take a vacation. I’m not going anywhere. I’m going to stay locked up inside my condo for two weeks straight because those two weeks without any contact with the natural atmosphere will be the most comfortable weeks of my life.