Do you have any trigger words? Words or expressions that offend you anytime you hear them used? There are the obvious ones, like racial slurs, but there are also less obvious terms that oftentimes people don’t even realize have problematic connotations.

We’re currently living in a time of increasing political correctness, of increased sensitivity to others’ triggers, but of course there’s also a backlash, with those decrying this new sensitivity as being overly PC, because it’s getting to the point where everything is offensive. Or at least every term with a negative slant is offensive, because duh. Obviously no one will be offended if you say, “that lecture was great!” But if you say, “that lecture was fucking stupid,” yeah, of course the person giving the lecture is going to be annoyed, you just insulted them. The problem arises when you insult not just the person you were trying to insult, but when you inadvertently insult an entire group of people who have nothing to do with the situation.

For instance, if you say “that lecture was retarded,” you’re not just insulting the lecturer, you’re insulting people with mental disabilities, and if that’s not your intention then you come across as at best, ignorant, and at worst, bigoted. I once had a lengthy discussion with someone who was defending her use of the R word, and she said she “doesn’t mean it that way”. But it doesn’t really matter how she means it, it matters how she’s coming across. No matter what you’re saying, you need to know what message you’re delivering, what message others are picking up on, not just the message you intended to send.

This same person was trying to defend her use of the N word. Yes, a middle-class white woman in her 30s. Her reasoning was that her step-kids use it all the time, supposedly in an ironic way, as though there is a way for a white kid to use a racial slur ironically. And clearly we should all take our social cues from teenagers. This woman claims to not be racist but if she’s using that word then she obviously is, or at least feels comfortable being perceived as such. I remember every single time in my life I’ve heard a white person use the N word, and if definitely influenced the way I perceived them. We all need to be aware of how we’re coming across.

But where do we draw the line? What about when words are used in the proper, dictionary definition, way, but can be perceived incorrectly? I’m thinking of someone I know who uses the word “retard” or “retarding” in the proper English language sense, as in, “this situation is retarding our progress,” meaning their progress is being slowed. And that is absolutely a valid use of that word. Unfortunately, this guy doesn’t hang out with English Lit majors, rather he hangs out largely with douche-bros whose first language isn’t even English. They think he’s saying the situation is retarded, and they’ll pipe up with, “yeah man, it’s totally retarded!” So now he’s set off a chain reaction of douchery. (I do defend my use of the word “douche” because both in the literal and colloquial sense it refers to something that touts itself as being good for a vagina, but is actually harmful.) My point is that even when words are being used correctly they can be perceived in hurtful ways, and we need to be aware of that.

I will now bring up a highly personal example. I tend to bristle anytime someone uses the word “anemic” to mean weak, as in “that was an anemic effort,” meaning “a poor effort”. Now that is the proper use of that word, according to the dictionary. But as someone who has anemia, I can’t help but cringe whenever I hear the word used in that way, because the implication is that to be what I am is a bad thing. And yeah, no one would choose to be “pallid,” or “sickly,” or “ashen,” but I am those things, and it’s never enjoyable to be reminded of how supposedly undesirable that is. Which I suppose is what inspired me to “reclaim” the word by calling this blog superanemic. 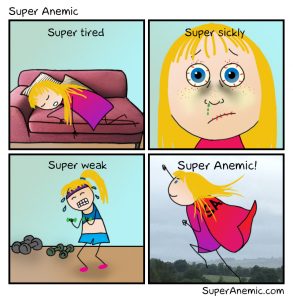 Yet I’m not asking you to stop using the word anemic to mean weak. I realize that this is my personal issue. But I do sympathize with the those who advocate for eliminating all ableist language. I recently read a post on everydayfeminism about this topic, and found it very interesting because it brought up how even words that are now considered mundane, such as stupid, moron, and idiot, have a problematic history.

I have definitely used such words before without considering their impact. And while I take offense most strongly to sexist terms, like pussy being used to mean weak, it would be disingenuous of me to advocate for the elimination of such terms while ignoring terms that are bothersome to others. After reading that article I asked myself what words remain. What words can we use when we want to say something negative? And then that question brought up another one: why am I, why are all of us, so intent on using negative language in the first place? Why is it so important for us to find ways to insult others? Maybe, instead of finding more creative ways to insult people or situations, I should avoid the insult altogether and try to find positive ways to engage in conversations. Rather than complaining that a new project at work is fucking stupid, perhaps I should suggest alternatives to that project. And if I truly must express my dissatisfaction, perhaps the word dissatisfaction should be enough.

But it’s not enough, is it? There have been studies that examine the power of profanity, and they’ve shown that swear words do actually make people feel better in a way that ordinary words don’t. But for obvious reasons, swear words are often inflammatory. Terms like “fucked up” and “suck it” carry sexual connotations, implying that sex is necessarily negative and threatening, and maintaining those connotations make our society a more hostile place, by contributing to rape culture. But choosing words that won’t offend anyone completely misses the point of profanity. It really isn’t enough to say fiddlesticks when you stub your toe. If I’m pissed off, a good “motherfucker” makes me feel a lot better than pretty much anything else, even though I guess the term implies that mothers shouldn’t be sexual, and anyone fucking a mother is necessarily deviant? 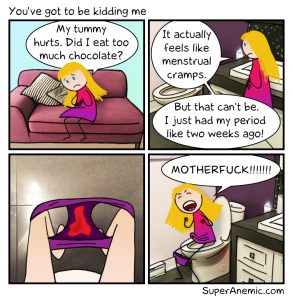 I know I’ll be accused of reading too much into words, but it would be foolhardy to underestimate the power of language. Sticks and stones may break my bones but seriously, insults hurt just as much.

And what about when problematic words are used in a positive way? What about saying “crazy” to mean cool? The kids today love saying “savage” to mean fiercely outrageous. I’m sure they’re not aware that this word carries derogatory connotations towards so-called primitive cultures. But even if they are aware, is it ok if they’re using it in a supposedly good way?

Honestly I don’t know. What do you think?