I put a lot of thought into everything I do. Ok, well, maybe not everything. I don’t agonize over which body wash to use when I hop into the shower or give much consideration to which pajamas I will wear to lounge around the house each evening, but generally speaking, most of my actions are well thought out. Even though I didn’t agonize over that body wash, I did think about it. I bought the store brand because it was cheap and has the exact same ingredient list as the fancy one. And the reason it didn’t take me ages to choose my pajamas is because I have a formula for which ones I wear. It’s an algorithm based on cleanliness and coziness.

I love devising these algorithms for my life, setting up plans and routines, and then tracking their success. I even track everything I do. I downloaded an app called ATracker which I use to keep track of all my activities, from work to sleeping and everything in between. I first got the tracker to help motivate me to spend more time on my personal projects, and less time in front of the TV, but now I mostly use the tracker because it’s fun. I like being able to review my day/week/month/year and find out how much time I spend doing various things. One of the activities I track is picking outfits. Because I don’t just hop out of bed each morning and throw on whatever’s convenient, oh no, I put careful consideration into everything I wear.

I organize my outfits primarily based on weather – which is one of the reasons I also obsessively keep track of the forecast – but also on colour, style, mood, and what I’ve recently worn. Every morning, after I get dressed, I take a selfie to document my outfit and then put these pics into an album on my iPad, so I can quickly access every outfit I’ve worn that year. This way I avoid duplicating an outfit too often. These albums also serve as outfit inspiration, as there exist so many possible combinations of my clothing items that I often forget ideas, and even forget what I own. When I bought my most recent condo, I insisted on having a dressing room which serves as an immense walk-in closet, where I can see all my clothes, organized by colour, which helps in visualizing outfits. Some might ask why I put so much time and effort (and money?) into such a thing, noting that it seems frivolous at best, and an utter waste of time at worst. But again, for me, it’s fun. And I’ve reached a point where not doing it seems weird.

Other things I diligently track are my exercise and diet. I use an app called MyFitnessPal for that. I started using it about three years ago when I wanted to get a bit more fit, and I figured it would help motivate me to work out and eat healthier. It has worked fantastically in this regard, but like my time tracker, I mostly use it at this point because I’m compelled to. I just can’t not. A while back I got bored with all the food logging and thought about taking a break, but I couldn’t stand the idea of not having a ledger of this information. Being able to look back at these stats on my life is very interesting to me. 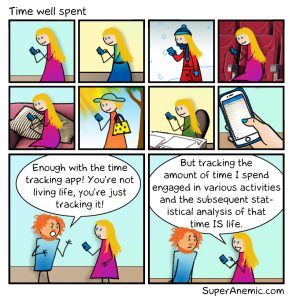 I guess what it comes down to is that I really love statistics. I’ve never been overly fond of math, so when I needed to take a stats course at University I was worried. Fortunately, I was pleasantly surprised to find stats fascinating! I still track a lot of stats at my paid job, even though I don’t work in the data department anymore, simply because it’s interesting to me. So much so that I find it a bit weird when others aren’t similarly fascinated.

Most people, when they find out about this obsessive tracking, are shocked, and perhaps even appalled. They can’t imagine spending so much time doing such a thing. And it does, indeed, take time. My significant other jokes that it’s all well and good for me to track what I do, but he’d be curious to know how much time I spend just tracking. So I added planning to my list of tracked activities, which includes any time I spend inputting or analyzing data, as well as the time I spend mapping it out, such as on the hard-copy agenda I also log information into, because sometimes it’s nice to have a tangible visual of things. So I can tell you with certainty that I’ve spent roughly twelve hours this past year just tracking all this stuff. But that number is likely much higher since I don’t track multi-tasking, and if I’m moving while planning, then that counts as working out.

When  my S.O. tells people about my life stats they admit that they too would love to have such data about their own lives, but they don’t want to do the work of gathering such information. I always agree that they are correct in believing it would be too much work. So far I’ve never met anyone that I think would enjoy this tracking the way I do. I’m sure such people exist though. I mean, the app wasn’t invented specifically for me. So what do you think? Are you a kindred spirit? Do you want to track your time so obsessively? Or am I wasting my time?