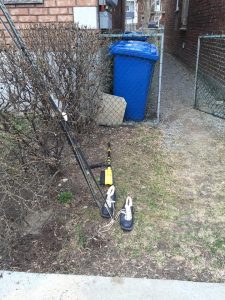 Cross-country skiing: the gentleman’s winter sport, thought Edgar Doubledorp. He’d waited a long time for snow this year and it wasn’t until February that there was finally enough powder in his neighbourhood to warrant a jaunt to the park. He’d gone up north once or twice to enjoy their relatively heavy snowfalls, though even up there it hadn’t been as glorious as in his youth. But today was just such a day of glory. There were nearly 50 centimeters out there already with no signs of letting up. The snow was just wet enough to be easily packed, but also powdery enough to allow for easy gliding. There was so much snow in fact that Edgar even skied all the way to the park, as the sidewalks and roads in between had enough coverage to keep him afloat above the asphalt.

Could there be anything more pleasurable that sliding along a blanket of white in absolute still and quiet? Certainly not. Even the shrieks of children having a snowball fight was dampened by the crystal covering. Everything was quiet and peaceful. Along the edge of the park he spied a foodtruck selling hot chocolate and he swished his way over for a treat. As he stood there, sipping his drink, the snowfall lessened, and the sun peaked out from behind the clouds. He finished his hot chocolate and kept along his journey, only to find the sun was getting rather insistent. He stopped a moment to unzip his parka and take out his sunglasses. A few minutes later it became necessary to remove his coat altogether and tie it around his waist. A few minutes after that, even his thermal shirt was becoming uncomfortable.

There was nothing for it but to head home. Edgar turned around with the intention of retracing his tracks, only to find said tracks disappearing. The snow was melting, and fast! He quickened his pace and kept pushing along, dragging his skis through what was increasingly become more wet grass than snow.

When he reached the edge of the park, he pushed up his sleeves, and surveyed the streets before him. The sun was beating down as though it carried a particular vendetta against him but if he hurried he might be able to make it before all the snow was gone. He rushed along the sidewalks, earning himself quizzical looks from passersby in flip-flops, as his skis scraped along the concrete.

He wasn’t even halfway home when he came across an ice cream truck serving cones to children engaged in a water fight. Nearby, a man regarded his vehicle in confusion, staring at the snow scraper in his hand. He caught Edgar’s eye and shook his head in disbelief. Wielding the snow scraper like an axe he raised it above his head and hurled it across his lawn, and it landed by a bush that was threatening to sprout. Edgar followed suit and took off not only his skis but his ski shoes as well, tossing them beside the discarded snow scraper. He and the man looked to each other and nodded with satisfaction. This was littering to be sure, but in this infernal climate, one could not be expected to remain gentlemanly!