I hate school! I thought it would be a great year, what a joke. It doesn’t matter what courses I’m taking I’m still me.

And the fact that I feel nauseous every day doesn’t help. I think I’m seriously sick… let’s not speak of such unpleasantries. Excuse me while I go cry and fantasize my way to sleep.

I’m not sure what this nausea was about, unless it was menstrual. Before I started taking birth control pills I got my period about every three weeks and it was brutal. I’ve been known to throw up in public places more than once because of this problem. The nausea could have also been anxiety though. When I was a child I had chronic stomach aches and when I complained about it to my mother she brought me to a doctor who told me there was nothing wrong. That was one of the first times I learned not to trust/listen to doctors (that deserves a rant of its own which I’ll save for another day). In any case, it was only thirty years later that the medical community finally acknowledged the connection between stomach pain and anxiety, especially in children. When I read a few of the articles referring to these studies the lightbulb clicked and I realized this was what I’d been suffering from my entire childhood.

Since Michelle (my sister’s friend) came over for Thanksgiving supper she had us say all the stuff we were thankful for. All I said was that I was thankful Star Trek TNG plays everyday and has a new season and that the Young Indianna Jones Chronicles plays. Pretty sad, eh?

Yeah, sad. Fictional characters were, at that time, my only friends. Today I’m happy to report that I also have one or two IRL friends, so… progress! 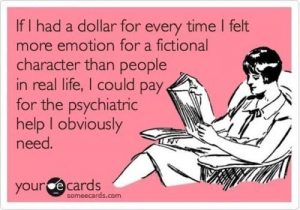