I went through a phase in adolescence where I refused to wear pink. I denounced the colour as anti-feminist because I considered it too girly. Eventually I had a revelation and realized that I could be a feminist and still dress in conventionally feminine attire and colours. When I was a child I loved doll-like fashion and as an adult I’ve returned to this appreciation for all things twee. Sometimes I still chastise myself for having a style that veers too juvenile but what can I say? It’s what I like. It’s who I am. My authentic style is ModCloth/Zooey Deschanelesque.

Don’t be afraid of pink. I rarely see women wearing it in office settings, probably because they want to be taken seriously and pink still carries that girly connotation, (though this wasn’t always the case) and of course, we still live in a society that considers all things feminine to be negative or at least inferior to masculine things. But perhaps embracing this colour can be a subversive act. We shouldn’t have to “act like men” (whatever that means) to be taken seriously. We should act like whoever we are, and if that means being “butch” then great, but if that means being “girly” then that’s great too. Being treated as equals isn’t just a matter of proving we can do whatever men are tradionally praised for, (although even when we do we get paid less, and when men enter professions that were traditionally thought of as female the perception of the field changes, not the perception of women) but also bringing esteem to things that are derided simply because they are associated with femininity.

My pinkspiration board includes the irrepressible Pinky Pie, a necklace I made on a whim, a painting of a cupcake, and the fabric of a dress I only wore once (to a wedding) and then never again because I thought it might be too twee even for me.

In this pink outfit I’m wearing something I would wear to work, though I only thought to pair all these pinks after putting together my pinkspiration board. Maybe I’ll wear this for realsies soon. 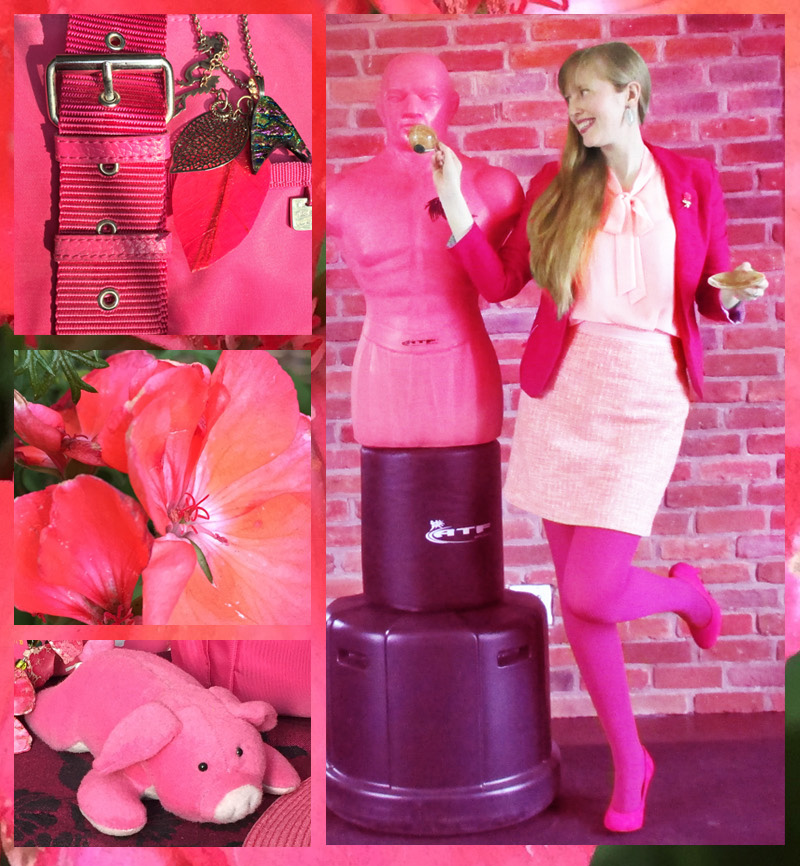 I love these hot pink shoes though they are slightly too small for me. I bought them anyway because the next half-size up were like boats on my feet. I only wear these shoes at the office, where I’m mostly sitting. If I need to wear pink shoes while walking for significant distances I just don’t. When I was in my late 20s, early 30s I used to regularly walk around town in heels but I’m over that now. As I age I get more concerned with my health so now when I walk, I WALK! I do it for efficiency and exercise, not just to get from point A to point B. So for my walk to the metro I’d wear this outfit with ankle boots that don’t really go but I’ve gotten to the point where I’d rather be comfortable than cute. I’ll never be that woman who is utterly on point all the time.