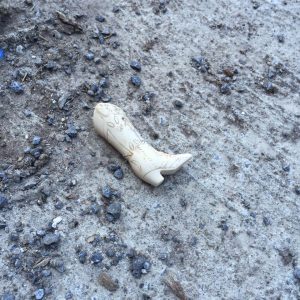 “Yeehaw!” replies Barbie, with as much enthusiasm as she can muster.

Today is another photo shoot for Mattel, and Barbie, as usual, is the model. She’s been a veterinarian, a school teacher, a flight attendant, a business woman, a homemaker, an explorer, even an astronaut, but her most steady gig has been as fashion model. Because even when she’s a scientist, she must be pink, and pretty, and perfect.

She’s a cowgirl today, though she’s not sure any horses will be involved. She’s been a country-western singer before, but this assignment is somehow different, as evidenced by the checkered shirt and jeans, as opposed to a denim skirt and pleather jacket trimmed with fringe. Still boots though. Deeply uncomfortable white cowboy boots that angrily graze her calves and make her arches ache. If she were a real woman she’d be able to wear leather shoes, but she’s just a doll, and plastic is good enough for her. She was made with tiny feet and a huge bust and were she human she wouldn’t even be able to stand, let alone run.

But she’s not human and running is exactly what she yearns to do. She’s read enough feminist theory to know that no woman, no person is truly free; we are all prisoners in cages of one type or another. Everyone must fill out TPS reports regardless of what job they are doing. But for some reason, today, Barbie is breaking.

She’s line-dancing now, with Ken, who is supposedly her boyfriend, but feels more like a brother. They are arm in arm, even though his arms don’t bend, so she has to do all the bending for him as well as herself. They kick their legs up and her boot flies off and bumps into the camera. Everyone laughs and the boot is jammed back onto her leg, deepening the bruises that are already building. When the photographer takes a coffee break, she slowly inches away from the set (she is never permitted coffee, or breaks) until she’s reached wardrobe. The prop master eyes her and she pretends to be perusing the garments. When his back is turned, she bolts. Outside she goes, with the sun blasting into her unblinking eyes with unfriendly intensity. She takes a step, and then another, and she trips, because of those fucking boots. Off the left one comes and she pitches it as far as she can, which isn’t particularly far. She takes several more steps and then throws away the right one, letting it rest among the gravel underfoot. Running barefoot is even more painful than wearing those damned boots but Barbie doesn’t care. Barbie is finally free.