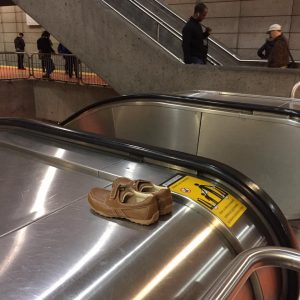 The first thing to be considered in this situation, as in any situation, was the safety of innocent bystanders. The man knew the best thing to do would be to carry out the deed in the privacy of his own home, where no one else would be bothered, with the use of something non-violent like pills, or perhaps a razor blade to the wrists. But the man, who thought of himself as a reasonably empathetic person, wanted, if he was being honest, other people to be bothered. He wanted the event to make the news. He wanted to be known, for once in his life, as a person who had accomplished something interesting. Gruesome perhaps, but interesting none the less. This act was selfish of course, but he was tired of being unselfish. He was sick of being the one who always handed in his work on time, of being the one who always held doors open for others, of being the one who always agreed with the consensus, even though he didn’t actually agree. He wanted, truly, to be disagreeable.

Still, there was no need for anyone else to be put in danger. His first idea had been to jump off a bridge, but that would cause a collision and many drivers and passengers would possibly be killed, and certainly traumatized. On the metro, only the driver of the train would be traumatized, and STM workers were all assholes anyway.

The man chose Lionel-Groulx station because it was busy, and important, but not quite as important as Berri-Uqam. He walked up to the platform on the orange line several times, but lost his nerve, and thought perhaps the green line would be better, because it used the older train cars. No use ruining one of the new cars. He rode the escalator up and down a few times, waiting for the crowd to dissipate. He wanted witnesses but not too many, not enough that they’d be able to stop him. He got off the escalator and stopped, considering his clothes. What a waste, he thought, to ruin a perfectly good dress shirt and pair of slacks. Yet undressing would attract undue attention. Still, his shoes were in excellent shape, and had only been purchased two weeks prior. He carefully took the off and placed them at the top of the escalator, hoping another man with size 10 feet would be able to make some use of them.

Finally, he knew he was ready. He stood at the edge of the platform, where very few others were standing, and waited to hear the train. He sang a nursery rhyme in his head in order to keep doubtful thoughts at bay, and when he would see the headlights, when he could see the man driving the train, he jumped, secure in the knowledge that this was in fact, the right decision.