I’m totally bored. I hate school. I hate people. I don’t hate TV. I don’t hate movies. I don’t hate drawing. I hate going to school and being at school and being on the bus and the people on the bus and the people at school. I hate Mr. Whitmore, I hate Jane, I hate everyone but my mother and brother, and Beau Gars. (my celebrity crush). I hate school. I hate all my classes. Sometimes I hate myself, not now. I  really hate Mr. Whitmore, I seriously wish he would die. I wish I could kill him. I wish I were Q. I WISH I WERE Q. I hate my life. I am so full of hate and have no way to release it. How can I release it? Maybe I’ll make a voodoo doll of Whitmore. Yeah! I wish I were Q.

Yeah, so that pretty much covers that. Kind of interesting that I never hated my mother, eh? Way to eschew teenaged girl stereotypes.

Mr. Whitmore was my English teacher. At one point he called on me, to comment on something in a book the class was reading, and I took my time formulating my answer, apparently too long, because he got pissed and yelled at me, and the entire class, that we must answer questions, and not simply sit there in silence. I was utterly humiliated, and that moment has remained seared in my brain as one of the most embarrassing in all of high school. I don’t remember the timelines, so I don’t know if this happened before or after, but another time, he asked me to comment on another book, and I quite honestly replied that the book had made me realize that I’d never been happy. Even though I knew this was an embarrassing thing to say, I said it anyway because I knew it would shock him, and shut him up. Even though I was indeed embarrassed, I got the desired effect, because he stammered in response, hesitantly asking the rest of the class if anyone had a similar reaction. No one responded, because of course they didn’t, but to this day I retain that as a moment of triumph over an asshole of an authority figure. In retrospect though, he wasn’t that bad. I actually had a bit of a love/hate relationship with Mr. Whitmore. I also had him for Drama, and I was basically teacher’s pet in that class. He once said, to the whole class, that I was the only student who ever understood what he was talking about. So that was nice.

When I say I wish I were Q, I’m of course talking about the Star Trek character, not the Bond character. I no longer wish I were omnipotent, ’cause that’d be boring, but I still love Star Trek. I’m recapping TNG these days, so head on over and check it out. 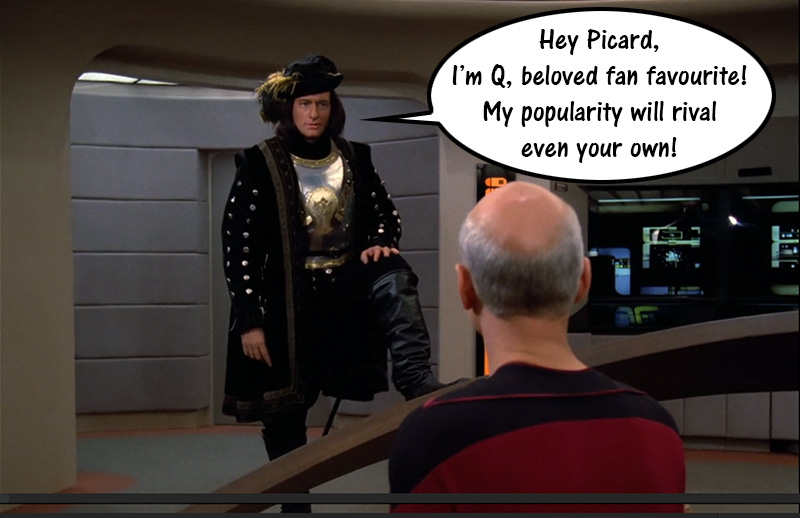