When we were ten years old, my best friend’s father died, and I did the worst thing anyone can do in that situation: I made it about me.

We’ll call this friend Genevieve, as that’s how I refer to her in my “this day in” posts. I’d actually always been a little bit afraid of her father, so when he died I had mixed feelings. I felt horrible for Genevieve of course, but I felt some degree of relief for myself, though thankfully I never admitted this to her. At my twelfth birthday party, a few of my guests let me know that Genevieve was huddled in a corner, crying. I went over to her and found out that some of the other kids had been talking about their fathers, and it had made her sad. She told me she felt stuck because she couldn’t talk to her mother about this great loss they’d suffered, as every time she tried, her mother would burst into tears. Obviously, I should have offered to be Genevieve’s sounding board. I should have told her that whenever she felt sad, or whenever she wanted to talk, she should come to me. But I didn’t do this. I didn’t do anything helpful. I sat dumbfounded and tried to think of something to say. The best I could come up with was something along the lines of how when her father died it made me think maybe my father could die, and that made me sad.  I mean… ????? As soon as I said it, I knew it was wrong. I was taking her grief and making it about me. And the worst part is I didn’t even truly feel that way. I simply didn’t know what to say, because I’m just not good at consoling people, or taking care of them. I’m not a caregiver.

I actually think I’m a pretty good listener, and I’m good at giving advice, but equally good at noticing when people don’t actually want advice, but just want a sounding board, or just want someone to agree with them. (Not that I always accommodate this wish since I’m honest to a fault). But I am absolutely horrible at taking care of people. This comes to light whenever the boyfriend gets sick. When I’m ill he’s amazing and becomes a sort of super-caregiver. He gets me buckets so I can vomit from the comfort of our bed, and he washes up any puke that might have missed the mark. I can’t even count all the bodily fluids he’s washed off of me and various surfaces in our condo. But when he gets sick, I’m useless. I want to help, but I just don’t know what to do. When people really need me, I freeze. 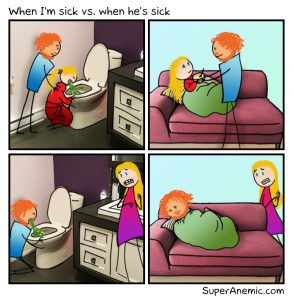 Boyfriend suggests this is a result of the way we were raised. When he was about six years old, his mother fell ill. So ill that she became bed-ridden. He and his sister grew up taking care of her, nay, being forced to take care of her, and their house. I’ve read enough articles about caregiver burnout to know that growing up in this way must have taken quite a toll and in some ways, Boyfriend is still traumatised by his childhood. For instance, he’s a great cook but refuses to do so because he associates cooking with his mother berating him for incompetently prepared meals. Yet he is also a product of his programming and can’t help but jump to action when someone he cares about needs him.

I, on the other hand, was never expected to care for anyone when I was young. Quite the contrary, as a kid I was often the one in need of help. I was a somewhat sickly kid, getting constant nosebleeds and frequent colds. I remember one time staying home from school and vomiting all over the couch. Then I did what any child would do in that situation: nothing. I walked away from the sofa and waited for my mother to get home and clean it up. Yes, I was left home alone as a sick child. It was the ’80s and that was fine back then, but also speaks to a certain level of neglect that was normal in my household. My siblings and I were never abused or neglected in any physical way – we always had food on the table and a roof over our heads – but we were never coddled, or offered much in the way of emotional support. I never thought it was weird because it’s all I’d ever known, but a few people over the years have commented on how oddly cold and distant my family is. An ex once complained that my father and brother were emotionally stunted (he actually used a much more vulgar term that I’ll spare you) and I’ve often been accused of being a  big ol’ meany pants. Perhaps this is why I was so useless towards Genevieve when she needed me most. I just don’t understand how to help other people, either physically or emotionally.

As I’ve gotten older, and my self-awareness has increased, I’ve gotten better. I’m a much more competent listening board for Genevieve now that we’re adults, but I’m still not the person who offers hugs and hand-holds. I still struggle with what to do when people are in distress, mostly out of a sense of awkwardness. My social anxiety contributes to this inability to help, but I think I’ve also, just naturally, got a relatively low level of empathy. I’m no sociopath but I’m rarely moved by the troubles of others. Based on the definitions provided here, I’d say I’m capable of sympathy, but not much empathy.

Boyfriend actually admires my lack of empathy. He offers the following analogy of evidence of the folly of empathy: If someone is drowning in a raging river, jumping into that river is empathy, resulting in two people drowning, whereas compassion is throwing that person a life preserver while remaining dry on the riverbank. We can only help others if we maintain a certain emotional distance from their woes. So fine, I’ve got the emotional distance thing covered. But what of compassion? Am I doing a good enough job of helping others in need? Or should I work harder to strengthen my ability to help others? I guess if I’ve written this blog post I feel a certain inadequacy in this regard. But I also must admit that for the sake of making my point, I’ve exaggerated how bad I am, and how good Boyfriend is when it comes to taking care of each other. He’s been known to kick me out of bed for coughing too much, and I’ve been known to make him soup. But still, perhaps I need to try harder the next time someone needs me. But on the other hand… eww, sick people are gross.